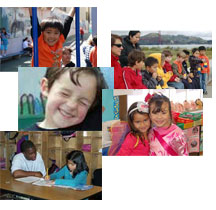 In one of the most rigorous scientific trials to find an effect on bullying, researchers from Mathematica Policy Research and Stanford University have found that a Playworks recess can transform school climate, paving the way for less bullying and more focus on learning.

The study, one of the first that evaluates a recess- and play-based program, found that investing in recess and organized play can reduce bullying, improve student behavior at recess and readiness for class, and provide more time for teaching and learning. The study specifically looked at what happened when schools partnered with Playworks.

The rigorous randomized experiment compared schools using Playworks to a control group of similar schools without the program during the 2010-2011 school year in five cities across the country. Researchers found the following ways in which Playworks transforms the school climate:

This new research finds evidence that Playworks offers a promising approach to reduce bullying, and represents the first in a series of findings.

Recess and other school-based play time are some of the least studied elements of the school day. Principals and teachers often say, however, that a bad recess period has a negative effect on the entire school day.

“This research confirms what we have seen as schools across the nation partner with Playworks to provide kids with healthy play every day. These new findings, taken together with existing data, tell us that kids better relate with one another, resolve conflicts constructively, get plenty of physical activity on the playground and return to class focused and ready to learn,” said Nancy Barrand, special advisor for program development at the Robert Wood Johnson Foundation (RWJF). “Increasingly, health and education leaders are recognizing that recess and play are effective ways to strengthen schools and fuel children’s social, emotional and physical development.”

This new research, sponsored by RWJF, contributes to a growing body of evidence that a safe, healthy recess environment is a key driver of better behavior and learning.

A recent University of California, San Francisco study compared physical and emotional health outcomes between students who receive Playworks and control students and found that students exposed to Playworks fared better. In another evaluation, the Harvard Family Research Projectcredited Playworks with improving cooperation among students and strengthening bonds among students and between kids and adults in school. In Baltimore, the Open Society Institute saw suspensions plummet at schools that partnered with Playworks.

“For our education system to succeed, our schools need to be able to create the conditions for learning,” said Jill Vialet, CEO and founder of Playworks. “The good news is that we’ve developed a model that can be replicated almost anywhere and produces positive and measurable results.”