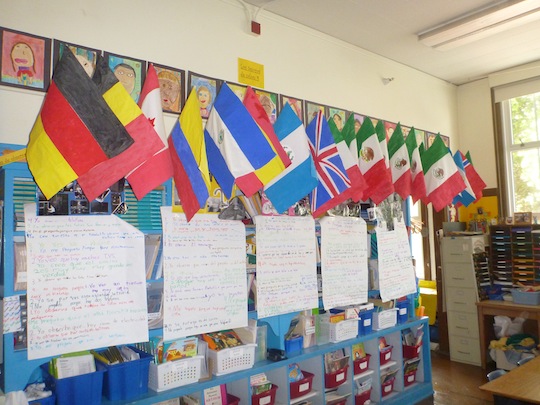 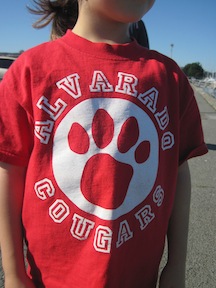 Alvarado follows state standards for math, science, social studies and language arts. The children in the Spanish Immersion program begin elementary school learning most of these subjects in Spanish, gradually incorporating more English as they get older. Kindergarten is taught in Spanish for 90 percent of the day, for 80 percent in first grade, for 70 percent in second grade, for 60 percent in third grade and 50 percent for fourth and fifth grades.

Ideally, the school district has filled two-thirds of the Spanish Immersion kindergarten seats with native Spanish speakers and bilingual students, which allows the teachers to converse with students in Spanish without resorting to English translation. The native English-speaking children learn Spanish from their fellows and from their teacher. The native Spanish-speaking children start their education in a familiar language and hone their English skills with their peers, especially during recess.

There is considerable emphasis on Latino culture across the programs. We celebrate the Day of the Dead; we host Fiesta Latina, an evening program of dance and Central American food; we put on a Spring Carnival modeled on Latin American celebrations.

A PTA-funded program coordinator links teachers with our PTA-funded science, art and physical education contractors to ensure that classroom content is supported and broadened by activities outside the room.

Our teachers take learning outside the classroom, too. Alvarado students take many field trips, usually in groups of two classrooms, often with groups from both the General Education and the Spanish Immersion programs. Last year two fourth-grade classes visited the Marin Headlands Institute, all four classes of kindergardeners visited the California Academy of Sciences, and one fourth/fifth-grade class visited the Academy twice. Third graders traveled downtown to see an ODC performance of the Velveteen Rabbit at Yerba Buena Center for the Arts.

The class structure is the same for the General Education and the Spanish Immersion programs. There are two classrooms for kindergarten, first, second and third grades. There is one fourth-grade class, one fifth-grade class and one classroom split between fourth and fifth graders. This “4/5 split” represents one of our spending priorities: we use money from the district to hire an extra teacher for the upper grades, thereby keeping our class sizes relatively small.

The composition of each class changes each year as children are shuffled and distributed into new classrooms for the next grade, based on staff assessments. This creates a larger circle of friends and familiar faces for each child while making the entire school a more tightly knit community.